It’s fair to say that there are few tools that can be said to be more essential than a flashlight. This is evidenced all the more by the British name for such a device, a “torch.” Since our earliest days when wooden torches lit with fire served as our sole light source and one of our most important means of defence, a “torch” has been an important part of survival for humans everywhere.

Flash forward to the present day and tac flashlights fill much the same role. They are necessary for providing light when you have none and can be used to defend yourself when you have no other weapons or tools with which to do so. A tactical flashlight is an essential piece of survival equipment and something that everyone should have.

The real question is which one is right for you? With that in mind, let’s take a greater look at what tactical flashlights are and which are the best options on the market today.

What to Look For

After all, a regular flashlight is often just made from plastic with even the best featuring hard-moulded plastic. By contrast, tactical flashlights feature metallic casings, which are more durable and can be used in a more defensive matter. Think about a short metal baseball bat that happens to have a bright light at the end and you have the idea.

Of course, that bright light is also a big part of it. While every flashlight has some kind of electric light, tactical models are supposed to be especially bright. They are usually at least several hundred lumens and do not burn out quickly. After all, these are the flashlights that you turn to for “tactical” or “survival” purposes so it’s essential that they last longer than your average flashlight.

Then there is the question of ease of use. Just because you want a powerful flashlight doesn’t mean that you want a complicated one. When you’re in the midst of an emergency situation, you can’t waste time fumbling around struggling to understand how to work your flashlight. As such, good tactical flashlights should be very intuitive.

With all of those factors in mind, let’s take a look at what makes these tac flashlight options shine.

As noted in the title, this model makes use of an LED tactical flashlight so if you’re looking for that, this may be an interesting option. It has been tested for operating in all manner of rugged conditions including impact and rough handling as well as freezing. This flashlight can even survive temporary submersion in water. 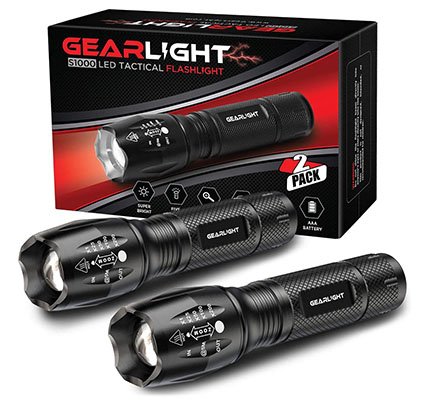 Taken together, all of this makes the GearLight the most indestructible model on our list. Its bright light can shine a light as far away as 1000 feet away. The flashlight is neither long nor short at around six inches long, making it small enough to keep in the glove compartment of your car while still having a good solid feel.

It also comes with five modes of operation, which is a definite plus for those looking for a highly versatile flashlight that can offer different kinds of beams for different situations. The beam can be widened or narrowed depending on your needs.

This flashlight is incredibly bright, boasting as many as a thousand lumens. Measuring just around 5.5 inches and weighing only a tad over three ounces, this model is highly light and compact, meaning that you can take it with you wherever you go.

It features an LED tactical flashlight, which is part of the reason why it is so bright, that can shine forward for a length of 600 feet. That’s not quite as long as other models on this list but that’s more of a testament to how powerful a tactical light can be. Most of us would be completely happy with a flashlight that “only” reached for 600 feet.

You can toggle between three different lighting settings and the unit is impact-resistant against a 10-foot drop. This is good since if you’re fumbling around for your flashlight in the dark, there is a fair chance that you might drop it. The fact that this model is so resilient means that you shouldn’t have to worry about replacing this model due to breakage.

One final upside to this model is that it has rechargeable batteries, which allow you to save on money and are a great survival bonus. Taken together, it’s no wonder that this is by far one of the most complete LED tactical flashlight options on the market today.

This particular model has three different settings. It is also water-resistant, which is good to have in any flashlight, let alone a tactical one. Both of these features are indicative of the fact that this is another flashlight model that is made to be used in rugged conditions. It can survive freezing, a nine-foot drop, and even some water. 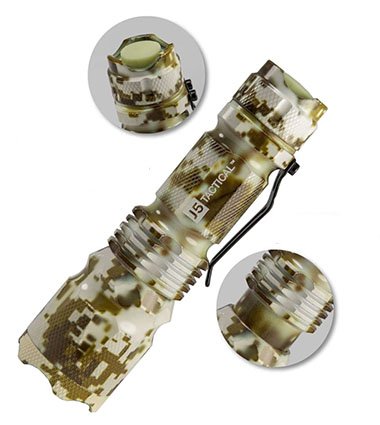 That being said, some have found its guarantees of durability a bit lacking and have even reported the model snapping in half. That’s obviously extremely rare and not likely reflective of the model’s overall performance; still, given how good all of these flashlights are, every little bit of critique minutiae matters when making your “tactical” choice.

Even so, this is also an extremely affordable model so if you’re looking for a basic tactical light that is at least somewhat durable some of the time, this may be a good decision.

Once again, one of the most impressive things about this tac flashlight is its power, boasting at least 400 lumens and a range of about 800 feet. Being able to cast a beam for such a long distance can be helpful if you are looking to travel in the woods and want to illuminate the path ahead of you. 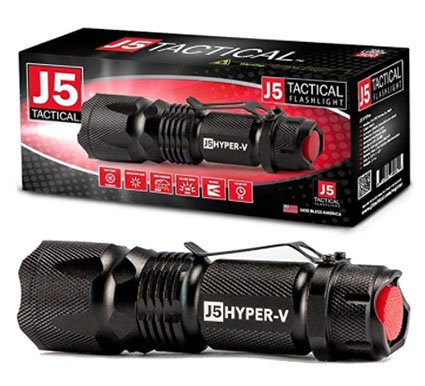 Another great thing about this model is the price. This is by far one of the best budget tactical flashlights. What’s more, as indicated above, while this model is related to the previous one, this unit actually has a better range at around 800 feet so it’s not just a budget buy but potentially a better one distance-wise as well.

That being said, this model is still only powered by three AAA batteries. By contrast, lots of tactical lights make use of rechargeable batteries. On the one hand, if you are in a situation where you are in need of a tactical light, you may well be in a position where you want or need rechargeable batteries and aren’t near a store where you can buy some more batteries or else might not want to bring more with you. On the other hand, how often will that be the case? In most situations, this shouldn’t be a problem.

Still, when it comes to strict survival-related measures, this is an Achilles heel. This model features a high, low, and strobe setting, the last of which is especially intriguing. Most flashlights obviously aren’t capable of this so if you want a strobe feature, this may be a model to consider. This model does come with an aluminium clip, which you can use to attach it to your belt.

All in all, this is a versatile model that, while lacking rechargeable batteries, has enough power to last in most situations.

Feel as if 1000 lumens somehow isn’t quite enough? Then how does more than double that brightness strike you? This option provides as much as 2200 lumens, which is an incredible amount that allows you to undertake everything from night-time exploration to rescue missions. 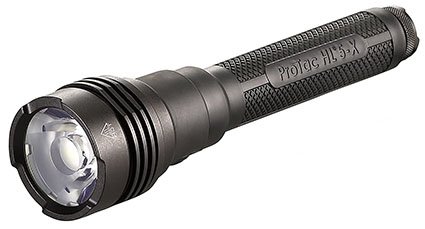 That being said, you will pay dearly for those 2200 lumens as this is easily the most expensive option on this list. On the other hand, you’ll likely save money on batteries because, as with the model from Fenix, this model can run on rechargeable batteries. However, you can also revert to traditional batteries as well, which makes it all the easier.

It is waterproof for up to three feet for at least half an hour, which isn’t bad at all. In terms of its construction, it pairs an easy-grip rubber sleeve with aircraft-grade aluminium for a flashlight body that can take a beating. Battery life ranges from 90 minutes on high to an impressive 43 hours on low. A wrist lanyard is very useful for keeping it in place.

One note of caution: this model is so powerful that it can wash out nearby objects with its overwhelming brightness. Still, that’s a “good” problem to have for an overall high-level tactical flashlight.

This is a miniature model, measuring only five inches long. There are iterations of this flashlight with the 2015 update being more easily rechargeable than others. It is very easy to hold and it also has a tremendous amount of output, blasting out a 1000 and a beam distance that can reach up to 756 feet. 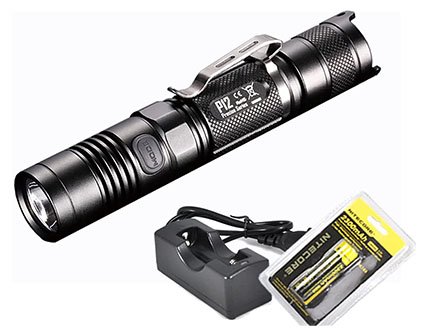 It comes with four different settings, and can run for as long as 28 hours on low and 75 minutes on the higher setting. This is also another waterproof candidate that is impact-resistant so you can once again rest assured that this model is tough enough to stand up to the wear and tear of use.

If there is anything negative about this, however, it’s that some users have reported that it dies too soon with a few saying it died within months. Still, for the majority of users, this has been a strong and versatile flashlight.

This is yet another model that cracks 1000 lumens in terms of overall brightness with a maximum of 1300 lumens. As mentioned with other models, that should be more than enough for any number of intensive night-time activities. 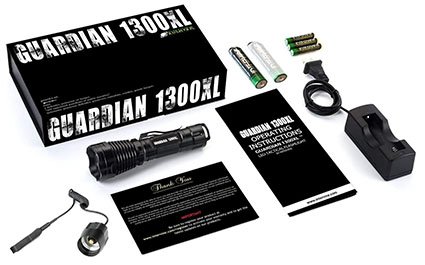 It comes with rechargeable batteries and a charger, the latter of which is a nice touch as you typically need to purchase chargers separately in other models. That said, you can also run it off of three AAA batteries. It comes with a removable belt clip and an anti-slip handle, making it that much easier to hold and carry. It is also waterproof and comes with shock-resistant casing. This model comes with five distinct operating modes.

It’s a bit pricier than other models but you get what you pay for and, in the case of the Supernova Guardian, you get quite a lot.

Which model you choose is ultimately a question of what kind of things you value. Some of these options have more lumens while others come with rechargeable batteries and even chargers. They are big or small and have all manner of additional features.

But whatever type you choose, you can rest assured that you have a flashlight that can handle camping and survival situations with a tac flashlight.