Has there ever been a time where you were out hiking in the rain, or boating down a river, and your phone started to die?  Do you remember hoping that your phone would last until you got to your destination?

The anxiety that comes with a dying phone is never fun. Lucky for you, waterproof power banks exist.

Waterproof power banks are great for outdoor activities, especially anything near water. It means your phone can always be charging, no matter where you are or what you’re doing.

If you’re looking for the best rugged power banks, you’re in the right place. Our review describes some of the best power banks available today. Let’s take a closer look, and pick out the one that best suits your needs.

What to Look For When Choosing a Waterproof Power Bank

When searching for a power bank to meet your needs, you need to look at features and decide what is most important. Here’s a closer look at what to consider:

How much power do you need your device to have? Is 10,800mAH enough, or do you need a lot more? Knowing how much juice a power bank should have to charge your devices promptly is essential.

Solar panels are a way to lower your carbon footprint, and they’re great for if you’re hiking or camping. Typically, power banks with solar panels stay charged as long as the sun is up and require little electricity to power the bank.

Do you have more than one device that needs charging? If so, does the power in your power bank support that? Does your power bank come with Qi or wireless charging, or is it USB only? Is it specific to a specific type of phone or universal? All of this is important to know when looking at whether you want your device to have multiple USB charging ports.

Here’s a rundown of power banks you’ll want to know more about:

If you’re planning on a rustic hiking trip for a few days, this might be the power bank for you. It has 20,000mAh, which means that it has about five charges in it for any given phone. Anker’s power bank uses a PowerIQ and VoltageBoost technology that combines optimized charge while also allowing trickle-charging without losing any power while in use. 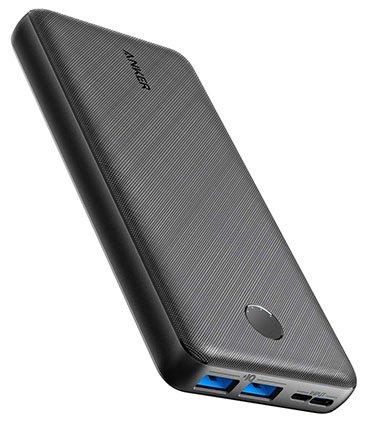 This Anker power bank has simultaneous charging, sporting 1 Micro USB, and 1 USB-C that allow “input” for the power bank to be charged. However, there are two standard USB ports for any charger you need, allowing any device to be charged with this power bank.

This power bank is just 0.7 inches thick and weighs less than a pound. It can fit in your pocket, with your phone. This rugged power bank also comes with a MultiProtect safety system that combines high-voltage protections with current regulation and temperature control, so that your devices are never over-charged or overheated.

If you want to lower your carbon footprint, then this power bank is for you. It sports 26,800mAH and can charge most smartphones at least six times, or a tablet twice. It has built-in safety precautions that protect your devices against overload, excess currents, short circuits, and overheating while charging. 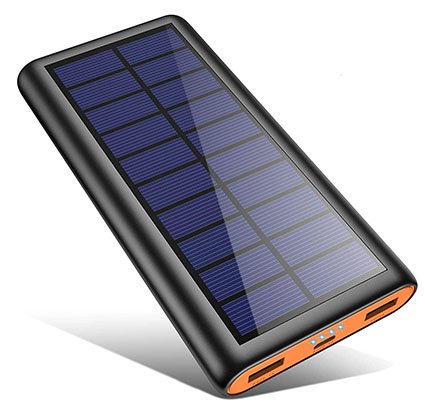 Do you use a lot of power? Do you have more than one device that you need to be charged at any given time, but especially when you’re away from your home? Aikove Wireless Portable Power Bank might be for you. It can charge up to four devices simultaneously. 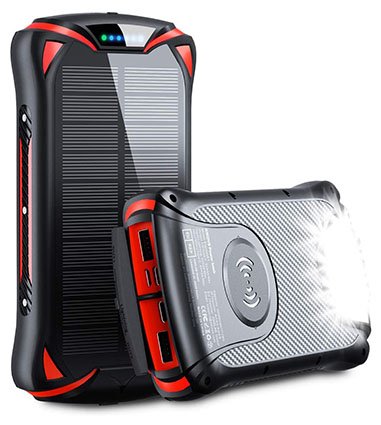 This rugged power bank is compatible with Qi devices, such as Samsung Galaxy S20, and most of the Samsung Note series with 10 watts of power for Qi devices. It has a 7.5 watt setting for iPhones and is overall compatible with any phone that requires a USB cable.

This waterproof power bank can also be used to charge your laptop and has three types of input. Type-c 3A, Micro 3A, and Lightning 2A. It does have a solar panel as well, which allows the power bank to be charged in the sun. Not only is this a charger, but it is also a flashlight with three settings. Normal, brighter, and SOS modes can be turned on with a click of the button.

When the device is charging something, it has five LED power indicators and a PD indicator. The PD indicator will be green, indicating that the bank is performing a USB C PD fast charge, while the others show the remaining power of the external battery.

Do you want a power bank that is sleek and looks good, and can easily fit inside your pocket or your purse while going unnoticed? The VOOE power bank is for you. This portable power bank has 26,800mAH, with dual USB output. It can charge a phone about six times and a tablet about three times before it requires another full charge. 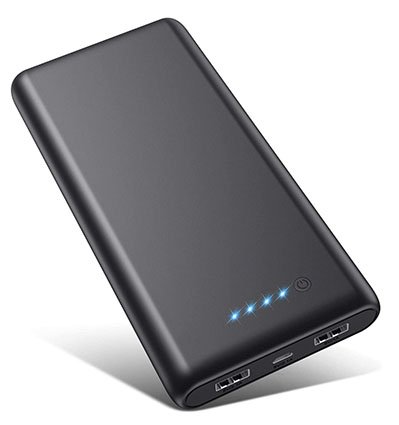 The dual output means that you can charge two devices at once. And like most of the devices on this list, this charger has a multi-protection technology that protects from voltage damage, over-charge, over-discharge, over-current, and more.

It comes with a warranty for 24 months. The company promises 24-hour replies and 12 months 100% refund. It also comes with a 24 month no reason to return service, meaning you can return this device for up to a year, without giving a reason why you’re returning it.

This waterproof power bank has a 25,000mAH battery. It can charge most smartphones eight to ten times and tablets three to four times. It has four solar panels that can fold up together. Due to the number of solar panels, this tends to charge faster than other solar chargers. 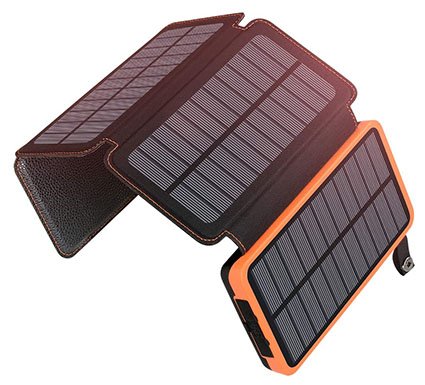 It has dual USB outputs, allowing two devices to charge at one time simultaneously. You can trust this device to auto adjust to fit the current device you are charging. It has a nine-LED flashlight that supports standard, SOS, and strobe modes.

It’s waterproof, dustproof, shockproof, and is made to adapt to harsh environments. Therefore, this is the perfect charger to take when you go rock climbing. It has a 12-month warranty, with a 30-days money-back guarantee.

If you want a small power bank that still packs some power, the EC Technology Power Bank is for you. It has 15,000mAH battery power, which can charge most phones three times in a row. That means it’s perfect for short trips, or trips where you won’t need to use the power bank nonstop. It’s remarkably compact, fitting right into your pocket, and probably coming up smaller than most phones nowadays. 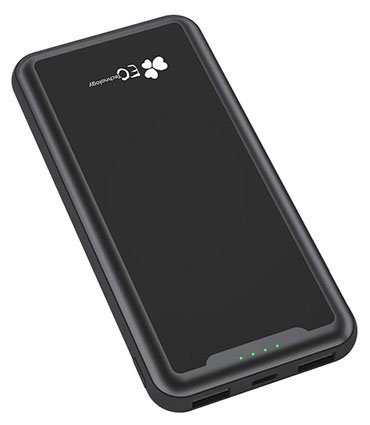 It has two choices for charging the power bank, type-C, or micro USB. However, only the micro USB allows output to charge other devices. There is a set of four LEDs that indicate the power level of the device.

There are six high-quality lithium-ion batteries to make the power bank safe to use to charge your phone, and protects it from overcharging, over-voltage, overcurrent, and short-circuiting.

The HETP Power Bank is excellent if you travel a lot, whether it’s hiking, road trips, or in the air. It’s certified safe for airplanes and meets the civil aviation safety requirements. This means, for those long plane rides, you can charge your phone or tablet safely. 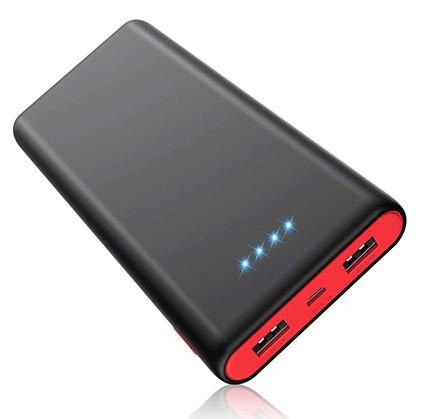 Having those LEDs make it easier for you to tell when your device needs to be recharged, so you’re never without your trust HETP power bank.

If you need a tough, rugged power bank that can withstand rain, snow, and dirt, FoPower PowerActive power bank is for you. This power bank has a 10,200mAH battery capacity, an output of 5 volts, 2.1 amps, and can charge phones or tablets and other USB enabled charging devices, like controllers, headphones, Nintendo Switches, and more. 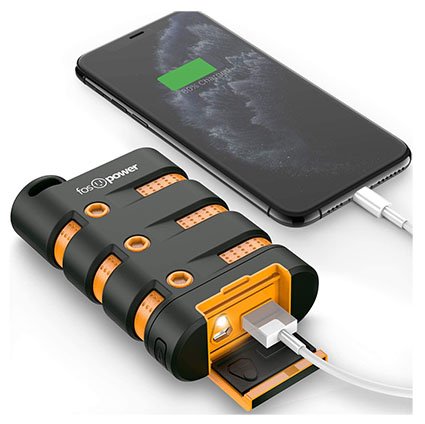 This device has a compass built-in, so if you ever get lost, just use your power bank as your compass. It has an LED flashlight. It has a certification of IP67, which means it can withstand dust and water. The FoPower can withstand being submerged in water of up to 1 meter for 30 minutes, but it is not recommended you swim with the power bank.

By knowing the answer to all of the above questions, you can safely choose a power bank that meets your needs. If you go on long trips, you’ll want a power bank with more charge. It’s also important to consider whether you want solar panels. A solar panel is great for if you’re not going to be around electricity for a while, or say, there’s a power outage. Having multiple ports to charge multiple devices is also great.