Maybe you work as a security guard at a construction site. Maybe you manage a construction company itself, and want to make sure that the different members of your team can communicate with one another while on the job. Or maybe you work far away from land out on the open water, as part of the crew of a fishing boat or in other nautical jobs. There are any number of reasons why you might need a walkie talkie and any number of professions it can service, but whatever the cause of your search, the fact remains that you need a model that is up to the task, whatever “the task” is for you. 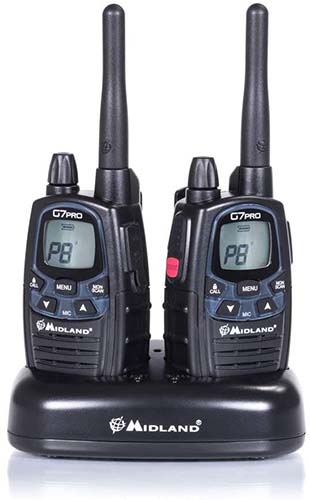 With that in mind, let’s take a closer look at the Midland G7 Pro and see what it has to offer.

To begin with, let’s list some of the more important features this model from Midland brings to the table:

One thing you are bound to notice about Midland G7 right off the bat is that it is pretty small. That isn’t necessarily a bad thing. After all, there are plenty of situations where you might want a smaller walkie talkie. If you have to work in an urban area, for example, and need to carry your walkie talkie with you without it being conspicuous, such as may be the case for a security guard in certain postings, a smaller unit may be helpful. At the same time, this is definitely something of which you should be aware because this unit is substantially smaller than other walkie talkies on the market. The display on this model is also somewhat small at 1.8 in.

However, neither of those issues are too big in themselves, and they both pale in comparison to the real attention-getting feature of this model, and the one that has sparked the most debate – the battery life. You have probably noticed that this model features a huge disparity in the two battery life ranges listed. Three hours is egregiously short, and 28 hours is superbly long, so what’s going on here? As with so much in life, the key is in how you use it. If you use this model for constant communication for hours on end, the battery can drain quite quickly. On the other hand, if you set it to standby mode, it can save battery life amazingly well, helping it attain that fantastic 28-hour mark. Your results could wind up at either end of those extremes depending on how you use this model, so really think about what you want to use this walkie talkie for before considering it.

If you do decide it’s right for you, there’s a lot to like about it just from this features list. For example, that noise cancelling feature will be a welcome sight for anyone who is annoyed by the hissing or loud crackling sounds that can accompany the end of transmissions. For a unit like this, 500 MW is quite good, and the overall sound quality of these units is of high quality as well.

Some of the best features offered by the Midland G7 Pro are:

Some of the bigger concerns about the Midland G7 Pro are:

As alluded to above, the most divisive feature surrounding reviews of this model are the battery life. It isn’t often that a model’s most praised and most criticized feature is the exact same feature, but that’s the case with this walkie talkie from Midland. In a way, it makes sense. You can imagine someone whose job requires them to constantly use the talk feature being annoyed as the walkie talkie’s battery drains far quicker than they might have hoped. On the other hand, you can equally imagine someone who uses the unit for on and off conversations throughout the day using that standby feature and getting tremendous battery life out of it.

You know your job.

And you know what you’re going to use this walkie talkie for.

Take all of that into consideration and decide which battery life scenario sounds more probable in your case. From that, you can tell if it’s likely to be the biggest pro or biggest con for you.

The other features of this model are far less controversial. For a smaller walkie talkie, this is reasonably durable. Its noise cancelling feature is good for those who don’t want to have to put up with the annoyance of abrupt loud sounds at the end of every call. Again, that can be good for those who work security jobs who don’t wish to give their positions away as a result of such loud sounds.

You can also alter the nature of the transmission itself, which in turn can help affect the battery life. If you are concerned about the battery burning out too early on you, playing around with this feature can be a good way to coax a bit more battery life out of this unit.

The divisive nature of the battery life issue can be difficult to parse, but it should hopefully be clear by this point whether this model from Midland is right for you. As long as you think you’ll be using the battery in such a way as to ensure that it doesn’t burn out too fast, this is a solid mode. That’s especially true for those looking for a walkie talkie that’s on the smaller side and one which likewise has good noise cancelling and transmission-altering capabilities.