Most people think a flashlight is just a flashlight. If the light illuminates from it when you turn it on, you’re all set. That’s not true. Not all flashlights are created equally. The Olight Baton Pro 2000 Lumens is a compact flashlight that has a rechargeable LED light. It has a single 3500mAh-18650 battery that is customized with a magnetic charging cable. 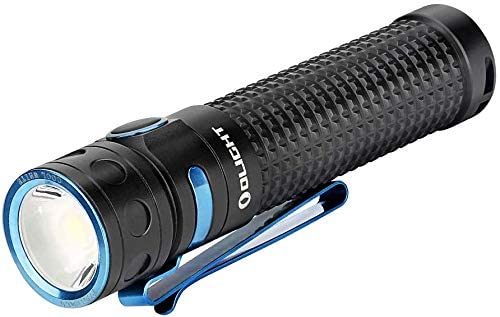 The flashlight is made from aluminium and anodized a semi-gloss black. At the end of the flashlight, there is s magnetic charging port. A safety test was performed with steel wool, and there were no problems. You will also find a strong magnet that holds the flashlight horizontally on a painted steel surface. There is also an area on the cap that has a hole for the lanyard. The flashlight’s body and cap are all one piece with an exceptionally smooth grip-ability that will not rip your pocket or hands when using or storing the flashlight.

Olight doesn’t identify the LED light being used in this flashlight. They state it is not a cool white LED.

The mode spacing is normal for the modes except for the turbo, ranging from 2000 to 600 Lumens.

When using the turbo mode, the 2000 lumens only last about a minute before dropping down 60% to about 800 lumens—600 lumens, last about 15 minutes. Once you reach the high mode of 600, the flashlight will maintain that 600 lumens for approximately 150 minutes before it drops down once more to medium mode at 120 lumens for an additional 40 minutes. The total runtime for the Baton Pro flashlight is about 200 minutes, which is a good runtime for an emitter of 18650.

The Baton Pro has the usual Olight user interface. The UIs are easy to use from the off position to the on requires one click of the flashlight switch. To turn on the moonlight mode, press activates take a little longer to come on than the regular on/off switch. To change modes, press the button, and the flashlight will go through each mode, starting with the lowest when you get to the mode you want to stop pressing the button. If you wish to get to the turbo lumens, double click the button. This flashlight also has a memory mode for high, medium, and low.

The flashlight has an MCC II (Magnetic Charging Cable). To charge a completely empty battery takes just over four and a half hours. The max charge rate is 0.80A, which could be better. However, with a 3500mAh / 4.185volt, it is a safe and moderate charge rate.

Here you can check a great video review by TheOutdoorGearReview:

What Do Users Say?

Overall, customers are happy with the Olight Baton Pro. It has a nice sturdy clip, the perfect size to fit your hand, lightweight, suitable to charge in the car or the house. This flashlight is great for indoor and outdoor activities. One user said it is of excellent quality with great light.

Baton Pro flashlight continues to receive small updates each year. It also has some great features, such as the quick full battery charging time and the clip. It has a lot of light for such a small, lightweight flashlight. The five-year warranty is a nice plus. Overall, the Olight Baton Pro is a good product.